In our ark, we are privileged to have a special memorial Torah. 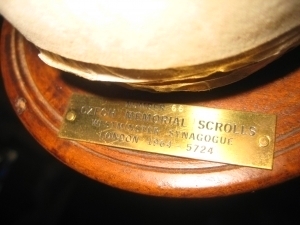 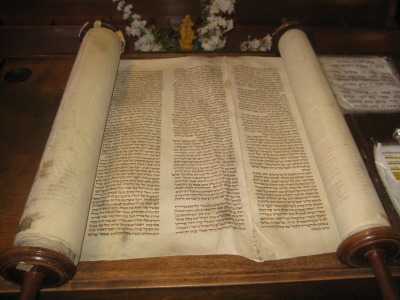 Temple Israel’s Holocaust Torah is from Nachod, a town in the Czech Republic. This special Torah came into being in the 18th century, when the United States was taking form.     Nachod is one of the oldest Jewish Communities in the Czech lands with Polish Jews residing there prior to 1340 along with Prague, Kolin, Mlada Boleslav and Roudnice.   The sixteenth century synagogue, which was rebuilt in the eighteenth and nineteenth centuries and even survive the Nazi occupation was demolished under the Communists in 1964.   The Nazis destroyed The Old Cemetery which had stones dating back to the mid seventeenth century.  When the war ended, a prayer room was established which was later converted into an apartment.

The Torah was taken from Nachod and stored by the Nazis.  It was finally rescued by the Westminster Torah Trust in London when in 1964, the Memorial Scrolls Committee of Westminster Synagogue in London arranged for the shipment of 1,564 scrolls to the Synagogue, where they were catalogued and repaired and restored when possible. Each Torah was given a numbered brass plaque to identify its origin.  Scrolls that could not be made fit for synagogue use were sent to religious and educational institutions as solemn memorials. Those that were repaired and could be used in religious service were sent to fulfill requests of synagogues all over the world in return for a contribution toward restoration expenses.   More information on The Memorial Scrolls Trust can be found on their website:https://www.memorialscrollstrust.org/

Rabbi Dr. Hugo Stransky served the people in Czechoslovakia then moved to London, New Zealand, Australia and finally at Congregation Beth Hillel of Washington Heights in New York City.  His last official function before retiring was the rededication of Torah Scroll # 66 at Temple Israel Reform Congregation of Staten Island.  Sharing the pulpit with Temple Israel’s spiritual leader, Rabbi Milton Rosenfeld, Dr. Stransky looked more closely at the scroll with tears in his eyes.  This was the sifre Torah Dr. Stransky used in his first congregation in Czechoslovakia, the synagogue of Nachod from 1930 to 1936.   “In what condition is it?’ he whispered to his colleague, his voice choked with emotion as he peered intently at the scroll before him. “Ah.” A bit faded, but it can be read.”

A purposeful career spanning three continents came to a gratifying conclusion as he tearfully looked at the Torah scroll he had held in his arms as he celebrated his first Sabbath as a “rabbi, teacher, and preacher in Israel” in a Bohemian Jewish community that is no more.  Rabbi Stransky looked down upon the congregation gathered in the sanctuary of Temple Israel to receive the old Torah scroll from Czechoslovakia.

The Nachod Scroll is a symbol and a constant reminder that our congregation has been entrusted with the heritage of the Jews of Nachod, and with it came the plea not to allow them to be forgotten in the enormity of The Final Solution