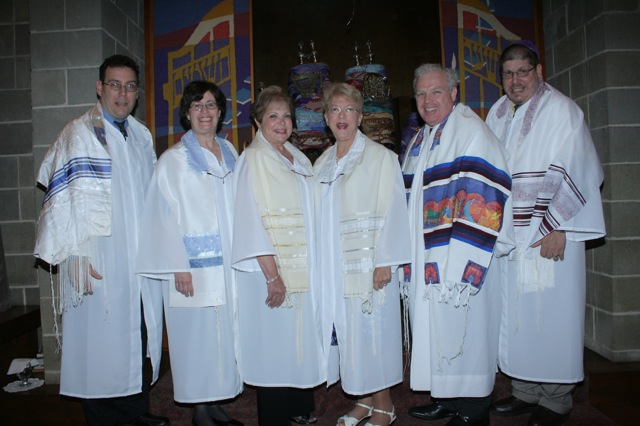 At a meeting of the five confirmands while discussing our dvar torah, a question was posed, “What is the purpose of the dvar torah? Our dvar torah, I asked. No, he answered, all dvar torahs. I thought, to inspire, to teach, to bring us closer to G-d. But my final thought and what I answered was, To teach us how to behave, how to be with each other.

What portion is more appropriate to that end, than this one, containing the 10 Commandments; the ultimate

expression of how we should behave, in our society, in our families, to each other and toward G-d.

These commandments are not only ours. They are universal laws known to every society. Indeed without these laws, a society cannot sustain itself.

In order to understand this, we should begin with some background.

Moses flees Egypt after slaying an Egyptian soldier who was beating a Hebrew. He takes refuge with Jethro, a Midianite Priest and the father of Zipporah, who subsequently becomes the wife of Moses. While tending Jethro’s flocks, Moses experiences God speaking to him from a burning bush. God commands Moses

to return to Egypt to free God’s people. Jethro releases Moses from his promise to work for him.

Several chapters later, we encounter Jethro again. When Jethro hears all that God has done for Moses and for Israel and how God has brought Israel out from Egypt, Jethro comes to the wilderness where Moses is encamped. He sends word to Moses that he is coming and Moses comes out to meet his father-in–law. Moses bows low and kisses him.

Moses tells his father-in-law all that has happened; what God has done to Pharaoh and the Egyptians, for Israels sake, all the hardships that occurred and how God has delivered them. And Jethro recognizes the greatness of God and brings a burnt offering and sacrifices for God.

The next day, Jethro observes Moses acting as Magistrate among the people, from morning until evening and how much he has to do. And Jethro says, What is this thing that you are doing to the people? Why do you act alone, why do the people stand about you from morning to evening. Moses replies, It is because the people come to me to inquire of God. When they have a dispute, it comes before me, and I decide between a man and his neighbor, and I make known the laws and teachings of God.

But Jethro, his father-in-law said to Moses, This thing you are doing is not right. You will surely wear yourself out and these people as well. The task is too heavy for you, you cannot do it alone. Now listen to me I will give you counsel. You represent the people before God, you bring the disputes before God, and make known to the people the laws and the teachings, and make known to them the way they are to go and the practices they are to follow. You shall also seek out from among all the people, capable men, trustworthy men and set them as chiefs of thousands, hundreds, fifties and tens and let them judge the people at all times. Have them bring every major dispute to you, but let them decide every minor dispute themselves. Make it easier for yourself and let them share the burden with you. If you do this, and God commands you, you will be able to bear up and all these people too will go home unwearied.

Moses, listens to his father-in-law and does just as Jethro said. Jethro then goes home to his own land.

The meeting between these two leaders points out many important concepts to us.

Moses’s behavior toward Jethro is in all ways respectful. G-d commands Moses to return to Egypt. What greater command could there be? Yet, Moses still goes to his father-in-law and says, let me go back to my kinsmen in Egypt—— because Moses has given his word to Jethro that he would stay, and so, he asks for permission to leave.

When Jethro comes to where the Israelites are encamped, Moses, who holds a high position, and has been appointed by G-d, takes the first step and goes out to greet his father-in-law and bows to him and kisses him. Another act of respect.

Moses listens to the advice of his father-in-law. Moses is a humble man. He does not allow his ego to get in the way. He sets an example of great leadership by being able to listen and learn and does not hesitate to implement change when necessary.

Jethro’s actions are also in all ways respectful, not only to Moses but to G-d as well.

Jethro, upon hearing the news from Moses regarding the deliverance of the Israelites from slavery, praises God and says that, now he knows that God is greater than all the Gods. And Jethro, a Midianite Priest is the first to offer a benediction and a sacrifice to God for the rescue of God’s people. According to the Sanhedrin (94a) Neither Moses nor Aaron nor any of the 600,000 Israelites had thought to bless God and sacrifice to him until Jethro came.

Jethro sees that his son-in-law is weary and that Moses’s strength is failing under the tremendous burden and responsibility of leadership. He offers a plan, with the understanding that it will be only if God commands it. He suggests to Moses a division as well as a delegation of authority. It is not enough to have the law revealed. It is essential that there be a workable administrative judicial system.

Moses maintains his role as prophet and messenger of God.

However in the future when the Israelites will go into the promised land Moses will no longer be with them to reveal the word of God.

Jethro has provided Israel with a plan of transition, a plan that will enable us to move forward from a people to the beginning of a nation. A nation that can govern itself.

Jethro has shown us that a great leader is willing to share his knowledge, understanding and wisdom.

This portion does not speak to us in terms of feelings.

We do not know if Moses loved his father in law.

We do not know if Moses resented or was grateful to hear the advice given to him.

Although God tells us to love, it is difficult to legislate feelings. Most of our commandments are about our behavior. After all, it is the action we take that determines what happens in our relationships, our families and our society.

In many ways our Temple, Temple Israel is a microcosm of that group of our forefathers in the desert. We have a spiritual leader,

A board of directors, committees, a congregation. Although our boundaries sometimes cross we attempt to divide the responsibilities into matters of spirituality and human affairs. We struggle to survive, defining and redefining our laws and the implementation of those laws, always, we pray, within a framework of Godliness.

Our goal should be to emulate Jethro and Moses, leaders who listen and learn from each other, leaders who give each other the respect we all deserve. Our great sage and scholar, Hillel made it very simple for us when he said, What is hateful to thyself do not do to another. That is the whole law. All else is commentary.

God does not speak directly to us as he did to Moses. Yet if we are open, we, like Moses, just might hear wisdom in the voices of others.

Let us learn to listen.

We are all familiar with these words from our prayerbook.

Pray as if everything depended on God.

Act as if everything depended on you.